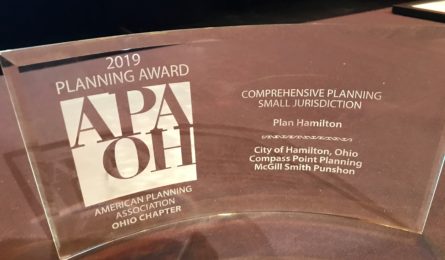 MSP is happy to announce that the APA Ohio has awarded the Compass Point Planning team (headed by Wendy Moeller and including MSP) the Ohio Planning Award for Comprehensive Planning | Small Jurisdiction for “Plan Hamilton.” The award was presented at the APA Ohio Planning Conference reception at the Ohio Theatre Playhouse Square on October 3. 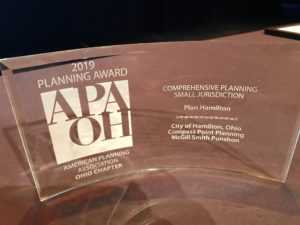 CLEVELAND, OH (October 3, 2019) – The Ohio Chapter of the American Planning Association (APA Ohio) is pleased to announce winners of the 2019 Ohio Planning Awards. The biennial awards program honors outstanding planning and planning leadership in Ohio, recognizing the highest levels of achievement. APA Ohio presented eight awards at the APA Ohio Planning Conference reception, held at the Ohio Theatre at Playhouse Square on October 3. The organization celebrates its centennial this year in the city in which it was founded.

APA Ohio Planning Awards Chair Matthew Schmidt, AICP, noted that the 2019 awards “are representative of the amazing impact planners have in communities throughout the state. From the creation of public spaces, to long-term visioning, and addressing social needs, the projects represented in this list only touch on the vast breadth of how our profession is changing Ohio for the better ‘Because We Plan’.”

Twenty seven nominations were received. Award nominations were reviewed and winners selected by a jury of professional planners from the APA Texas Chapter. Evaluation criteria include innovation, creativity, transferability and public participation.

About APA Ohio:
APA Ohio is a statewide, non-profit association of citizens and professional planners committed to enhancing community planning in order to improve the quality of life for all Ohioans. APA Ohio is a state chapter of the American Planning Association (APA) and operates under the guidance of a volunteer Board of Trustees elected from the general membership. Chapter sections include Cincinnati, Cleveland, Columbus, Miami Valley and Northwest Ohio. Visit www.ohioplanning.org for additional information.

Founded in October 1919, APA Ohio evolved from a group of future-oriented civic-minded Clevelanders who organized the first Ohio State Conference on City Planning. The Ohio Planning Conference, later merging with the American Planning Association, was the first organization of its kind and remains the oldest association of citizen and professional planners in the country. Over the past one hundred years, the association and its members have changed and evolved but our mission remains the same – to promote good planning for the betterment of all Ohioans